Where does your operation sit on CEEC’s efficiency curve? (CEEC workshop, Vancouver, BC September 24th) 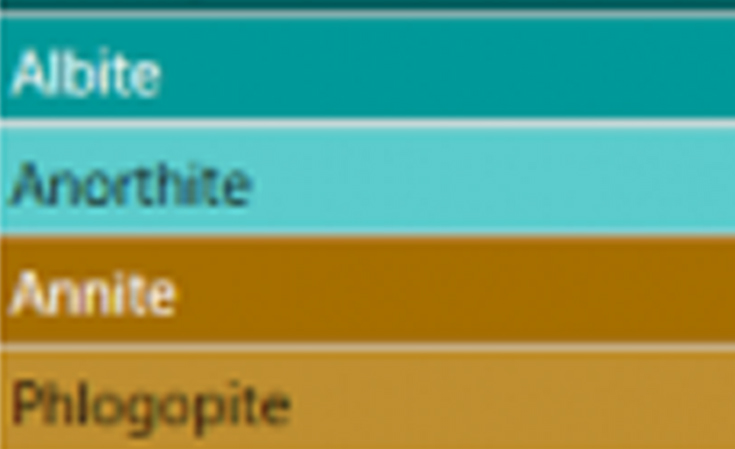 The following article was originally posted on the Automated Mineralogy and Petrology Blog by Dr Alan Butcher and Dr David Haberlah.  The topic is something that as they mention has begun to slip from our collective consciousness and I felt that it was great to promote having a standardised colour scheme for automated mineralogy reporting, no matter which system we choose to use.  This is a great explanation of the background to the Butcher Colour Scheme and rationale for each grouping and I encourage everyone to consider the merits of standardising mineral colour schemes for reporting.

The signature output from FEI’s SEM-EDS automated mineralogy technology is the creation of visually striking, spatially-resolved mineral maps. Each pixel within an image is accurately assigned by the software to a conventional mineral, or another application-specific phase. The colour assigned to each mineral is fully flexible, and can be portrayed simply as one of the 16,581,375 RGB computer colours, including grey scales. However, a convention has been established since the original QEMSCAN developments at CSIRO, which has been expanded and improved in the years since by Intellection and FEI. This false colour scheme is affectionately referred to by those in the know as the “Butcher Colour Scheme” after its inventor, Alan R. Butcher, whereby certain key rock-forming silicates, carbonates, oxides, phosphates and sulfates are colourized in a systematic way so as to allow easy and instant visual recognition of minerals across a variety of application areas. As a result, the images are rendered both scientifically informative and aesthetically pleasing.

The most common minerals in terrestrial rocks, especially those that make up the lithosphere, are the Feldspar and Silica Group minerals including quartz and feldspar. It was therefore critical from the outset that the colours chosen for these minerals were distinct and pleasing to the observer, as well as practical from a communication perspective (projection and printing). In the subtractive CMYK colour model used in colour printing, cyan and magenta are at opposite ends in addition to yellow. Lighter shades of cyan and magenta required to not overwhelm the viewer are more easily visible than a lighter yellow. It is also well known that pale magenta (pink) and cyan (turquoise) combinations are commonly used to great effect in various artistic and design situations (such as in differentiating baby clothes, for example!), and it was this concept that formed part of the inspiration for choosing light pink (or now rose) for quartz, and various hues of cyan for the end-members of the feldspar series. The colour variations of cyan are also unique enough to be easily discriminated from the primary colours blue and green of the additive RGB colour model.

The human eye can discriminate more shades of green than variations of hue,saturation and value of any other colour, as can be witnessed by anyone observing the subtleties of foliage in most natural landscapes. Not surprising, therefore, green was chosen to represent the most complex and variable ClayGroup of minerals, which to this day remain a challenge to accurately differentiate because of their subtle compositions, habits and paragenesis. The one exception to this used to be the mineral kaolinite, which by its very nature (relatively simple chemistry) is easily discriminated, and as a result was designated a distinctive, bold colour (brown). In the redesign of the colour scheme in more recent years, kaolinite was gradually incorporated into the green colour space using the most distinct green. The underlying reason for this move has been to free up brown colours to better discriminate the primary sheet silicates of the micas.

The Mica Group of minerals can be identified easily down to the species level, such that biotite and muscovite require their own unique colours. Initially, optical characteristics have been mimicked here. It is common practice therefore to colour biotite a foxy-brown (in recognition of its distinctive pleochroic behaviour when viewed in plane polarized light); and muscovite a fluorescent blue-purple (in acknowledgement of the high birefringence colours attained in crossed polarized light). With the expansion of our ability to accurately identify and differentiate micas including annite, phlogopite, muscovite, and glauconite, it became necessary to expand the brown values from gold via ocher to bronze to encompass the full group. Glauconite, now represented in olive, is closest to the greens of the clays, talc is highlighted in golden, and the dark biotites are depicted in ocher.

The Carbonate Group presents yet another challenge to the spatial mineralogy data analyst. At first sight, it could be argued that as calcite and dolomite are only found in trace amounts in most common metallic ores (limestone-hosted deposits excepted), the choice of colour may not be worth worrying too much about (unless acid leaching was the preferred mineral processing method), and therefore a simple scale of greys could be used to represent these two minerals. However, the importance of differentiating carbonates becomes critical when examining biochemical and chemical sedimentary rocks (such as limestones), especially of the type found in commercially important geological situations (sub-surface Middle Eastern reservoirs!). And so it was found necessary to select colours that looked both visually appealing when present in large amounts, and yet contrasted nicely (rather than clashed) with silicates, sulfides and oxides, when present. It was found that shades of lilac-purple work best to represent calcite, in combination with a dark navy blue for dolomite.  In recent years, the increasing interest in accurately mapping the subtle chemical variations of carbonate reservoir rocks has expanded on the traditional blue hues of carbonates. Today, pure calcite is depicted in a pale blue (somewhat similarly to the pale red (rose) for quartz), creating a visually striking way to discriminate the two dominant oil and gas reservoir rock types. In carbonates, there are arguably three cation variations of particular interest; magnesium, iron, and manganese. The revised colour scheme now adds the dark blue ultramarine with increasing Mg content, in keeping with the traditional navy blue of dolomite. Iron in contrast adds a red hue, resulting in the dark indigo of siderite, whereas Mn adds a green hue resulting in the azure of kutnohorite.

Minerals which are visible to SEM-EDS techniques but remain frustratingly opaque in transmitted polarized optical light (such as all cubic minerals) required a different approach. One of these is pyrite, a very common (yet easily identifiable) accessory phase in many different types of rock and ore. It rarely forms monomineralic aggregates, instead preferring to form dispersed grains or framboids in mudrocks, shale, polymetallic ores, and igneous & metamorphicrocks. The colour assigned to pyrite therefore had to be one that was visible when present in small amounts, yet would contrast nicely with rock-forming silicates. After much experimentation, yellow as the third and remaining primary colour of the CMYK colour model was chosen for pyrite. This has not only fulfilled the above criteria, but has since chimed with geologists because of the fact that iron sulfides (at least when fresh) are characteristically yellow when viewed in hand specimen.  By similar reasoning, chromite, another common accessory in many basic igneous rocks, has been often assigned the colour black (now maroon); and Iron Oxides (hematite, magnetite, goethite, limonite), where possible, are given various shades of brown colouration.

Other accessory or Ultra-trace Minerals needed to be visualized and highlighted, especially within large, textually busy images. Bright primary colours have been found to work best in these situations. Zircon, for example, can be seen easily if coloured a hot pink (magenta), apatite can be nicely discriminated from rose quartz if coloured crimson; and rutile tends to stand out from all other minerals if made into red. This leaves the purple to eggplant colours for the Sulfates (gypsum/anhydrite, barite). The Halides are coloured in violet to plum.

With the advent of automated mineralogy crossing over into the Geoscience world, more colours were required to represent common igneous and metamorphic minerals, over and above those already described. By this stage, our options were running out. However, olivine, by its very name, lends itself nicely to a olive colour; and seems to contrast well if used in combination with pale greens or browns to represent commonly associated minerals (pyroxenes and amphiboles), and pale purples for alteration phases (serpentinite, for example). Today, pyroxenes, amphiboles and the olivine group occupy a separate colour space of distinct grey-greens. The garnets look compelling if their colours in hand specimen (purples and reds) are somehow translated appropriately into the digital images. Today, the garnets occupy the distinct range between light salmon and dark/brown salmon.

Traditionally, not much thought has been given to discriminate rock-forming minerals from porosity, organic matter, and unclassified spectra. With the recent focus of automated mineralogy on oil and gas applications, visually discriminating these phases are of primary importance. Fortunately, the greyscale values ranging from white to black have not been used consistently in the past. It is here suggested to use white to highlight pores, silver to contrast pores from organic matter, and black to show those pixels that could not be accurately identified and require additional work to be classified.

History and experience has shown that detailed studies on application-specific samples such as meteorites, volcanic dust, or heavy mineral concentrates, require that the above scheme may not always work. In these cases, it is not uncommon that minerals of low interest are represented simply by shades of grey, whilst those of most interest are given primary colours (red, green, blue, cyan, magenta, yellow), which produces maximum contrast and the best visual impact. Finally, if all of the above is not to one’s liking, users can always choose their own customized scheme (again, impact is maximized if consistent colours are used across all samples). Certain colour schemes have even been created which are totally unique to a single sample, such as those where the images are used purely for artistic projects. However, in the interest of promoting automated mineralogy as an analytical technique coming of age, it will be beneficial if a standa
rd set of colour-mineral associations is used by the wider community to facilitate peer review and communication of spatial mineralogy data. It is promising to see that most oil companies are applying the above colour scheme by and large within their R&D labs, and that the new generation of service providers specializing on spatial mineralogy data, analysis and interpretation – such as Rocktype Ltd – are promoting it as the industry standard.

As a final note it should be emphasized that this colour scheme for minerals will be – by its very nature – different to those used for mapping elements and lithology (rock-typing), where for example sandstone as a lithology is commonly depicted in yellow.